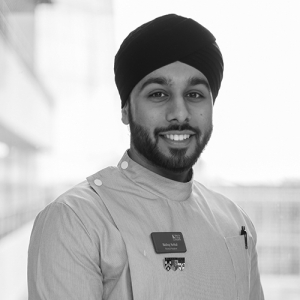 Bal graduated from the prestigious King’s College London Dental Institute. During his undergraduate days Bal served as the President of the King’s College London Dental Society where he introduced numerous new initiatives. His work for the Dental Society caught the eye of the British Dental Journal in which he was interviewed and featured – the BDJ is the most widely distributed dental journal in the UK. Throughout his undergraduate training his work, clinical skills and commitment to the institution was recognised by numerous clinical and academic accolades – the Guy’s Full shield, the Richard Dickinson USA trust fund award, King’s Opportunity Fund, Gold Star Award and most notably the Jelf Medal – the most prestigious award the dental school offers. Since graduating Bal won first place in Mini-Smile-Makeover’s Young Maestro as well as being named as the NSK Rising Star 2019. He most recently was recognised as the Best Young Dentist London 2020 at both the FMC & Private Dentistry Awards.

After graduating he completed his dental foundation training in the highly sought-after North-East London Deanery. Bal is still committed to King’s Dental Institute and has been recognised as an Ambassador for the dental school. He currently serves on the KCL Dental Alumni Association committee.

Bal loves treating his patients with the highest level of care and strives to go that one step further to help them feel more comfortable with their oral health. He loves aesthetic dentistry and has had his work showcased in numerous presentations and has presented some of his work at conferences in the United States. He believes in continuous development to ensure his patients receive the utmost standard of care and has completed a 4-day residency in Milan with the respected Style Italiano Group. He has also completed a post-graduate year-long programme on comprehensive and cosmetic dentistry under the tutelage of world-renowned dentist, Chris Orr. Bal has most recently been appointed as Young Opinion Leader for Ivoclar Vivadent – a leading dental materials company.

Outside of work Bal is a keen footballer and enjoys staying fit by training regularly. He enjoys travelling & spending time with family.

We are regulated by the General Dental Council (GDC). Note we are a wholly private practice.

Smiles By Gurms offers same day dental appointments for Invisalign, Teeth Whitening and Hygiene plus our full range of treatments.

Page load link
Manage Cookie Consent
To provide the best experiences, we use technologies like cookies to store and/or access device information. Consenting to these technologies will allow us to process data such as anonymous browsing behavior or unique IDs on this site. Not consenting or withdrawing consent, may adversely affect certain features and functions.
Manage options Manage services Manage vendors Read more about these purposes
Preferences
{title} {title} {title}
CALL NOW
Go to Top